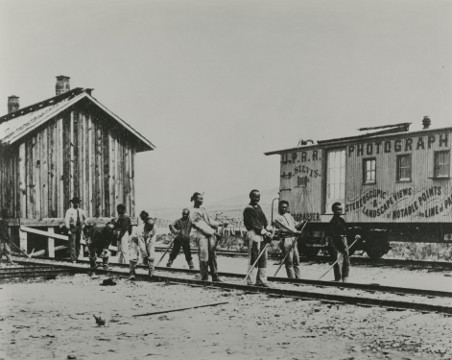 Chinese Immigrants and the Transcontinental Railroad

May is Asian American and Pacific Islander (AAPI) Heritage Month, and we’d like to celebrate by honoring the contributions the AAPI community has made in transportation history — specifically the first transcontinental railroad that was completed on May 10, 1869. Did you know that 20,000 Chinese immigrants helped build the transcontinental railroad? That is one of the reasons the month of May was chosen to be AAPI Heritage Month.

What is the Transcontinental Railroad?

The transcontinental railroad was an initiative to link the eastern and western United States through a railroad built by Central Pacific and Union Pacific railroads. It took seven years between 1862 and 1869 to complete. The Central Pacific started in Sacramento, California, and the Union Pacific started in Omaha, Nebraska. It truly was a race, and they met at Promontory Summit, Utah, where the famous golden spike was ceremonially driven to symbolize a nation connected.

Why Did Chinese Immigrants Come to America?

Many people migrated to the United States, and specifically California, during the California Gold Rush starting in 1848 and lasting until 1855. The word spread quickly worldwide when there was rumored to be a “gold mountain,” so many Chinese travelers made the voyage across the Pacific Ocean in hopes of finding riches to afford a life and family back home in China. The idea of hope and future prosperity brought immigrants to America, but they faced often harsh discrimination and harassment. On top of that they struggled to find good employments after many of the promises of the “Gold Rush” were proven false.

How Did Chinese Immigrants Begin Working on the Railroad?

After struggling to find workers willing to take on labor-intensive jobs in the mountains, the Central Pacific Railroad hired a small group of 21 Chinese workers in 1864. After this group completed the work successfully, additional Chinese workers were hired. The immigrants were willing to take on the strenuous work at a low wage, leading the railroad to hire them in large numbers. Central Pacific was working through Chinese labor agents who negotiated the contracts on behalf of the workers; often arranging for their transportation from China. The railroad would pay the agent who in turn paid the workers. More immigrants from China in need of employment were arriving every day. In about two years, they made up about 90% of Central Pacific’s workforce.

What Work Did Chinese Immigrants Do on the Transcontinental Railroad?

Chinese immigrants took on a variety of back-breaking jobs. This ranged from unskilled labor to blacksmithing, tunneling and carpentry. All this work was done with hand tools as well. These workers had the most difficult and dangerous jobs: tunneling and blasting. They also were paid 30-50% lower wages and hundreds of workers died from explosions, landslides, accidents, and disease. They were not provided room and board as other workers were. Although, this resulted in them being healthier than their Irish counterparts eating a diet of rice, chicken, and fish and drinking only boiled water for tea.

Honoring the Impact of Chinese Immigrants

The impressive Chinese workers set a record for laying 10 miles of track by hand in a single day, more specially in 11 hours. It’s a record that still stands today. When Union Pacific and Central Pacific met at Promontory, the last rail was laid by the Chinese track gang that set the record.

At Loup, we are proud to share the story and honor the immense contributions the Chinese and the AAPI community have made to help make America’s freight transportation system what it is today.