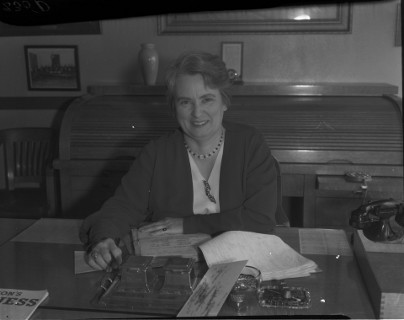 Women Who Made History in the Transportation Industry

For Women’s History Month, we are celebrating and honoring the women who made an impact on transportation history. Without these women, the transportation industry wouldn’t be where it is today.

Mary Walton made huge advancements in reducing the air and noise pollution generated by railroads. In 1879, she patented a method for redirecting emissions through water tanks to trap pollutants and transport them through the sewage system.

Later, in 1881, Walton patented a system that used cotton and sand in a wooden box around an elevated track to reduce noise pollution. Thomas Edison had been asked to find a solution for the noise, but failed. Walton succeeded. In addition to being an early advocate for women, Walton was an early environmentalist as well.

Sarah Clark Kidder was the first female president of a railroad. She became president of the Nevada County Narrow Gauge Railroad after her husband, the previous president, passed away in 1901. Kidder was voted into the position with little experience, but proved to be an excellent choice, not only paying off the debt her husband incurred but gaining a hefty profit as well.

Kidder was able to complete this and so much more while also fighting many obstacles, including a legal battle over her ownership of the company from the son of an old business partner to her husband.

Olive Dennis was an engineer whose design innovations transformed railway travel. She was only the second woman to receive a degree in civil engineering from Cornell. Dennis was also the first female member of the American Railway Engineering Association while she was the Baltimore & Ohio Railroad’s engineer of service. From 1920 until 1951, she filed patents to increase rail passenger comfort using ventilators, air conditioning, dimmed lights and more. Dennis’s work affected all types of transportation, encouraging bus and airline companies to improve comfort for passengers as well. So, the next time you travel sitting in a nice, air-conditioned bus or airplane, you have her to thank.

In 1920, Luella Bates was the first woman in New York to have a commercial truck driving license. After World War I, she was one of few women to keep her job as a truck driver due to her skill and expertise, paving the way for more women to work in the trucking industry. While female truck drivers are still in the minority, making up 6.6% of 3.5 million truck drivers in the United States, the number continues to grow.

In 1935, Avis Lobdell was charged with riding Union Pacific’s Challenger train and asking passengers what they wanted from their train riding experience. Through her research, she learned there was much that could be done to improve train travel for women. As a result of her efforts, Lobdell was appointed to head a special Women's Travel Department for Union Pacific Railroad, which focused on the enhancement of the female traveler's experience on the railroad. While other railroads thought this was unnecessary, Lobdell’s improvements helped develop what became one of the most successful trains in UP history.

In 1944, Arcola Philpott became the first African American and the first female motorman (or “motormanette”). Philpott drove a streetcar in Los Angeles on the Vermont streetcar line, traveling to what is now known as Martin Luther King Boulevard. In doing so, she paved the way for both her gender and her race.

These incredible women and their historic accomplishments in the transportation industry have served as role models for the future generations of women working in this industry. In 2021, the transportation industry is still male-dominated, but Loup and Union Pacific Railroad, our parent company, are working together to increase diversity, inclusion and equity. Women make up approximately 5.5% of Union Pacific’s total workforce, and we have a goal to double the representation of women to 11% by 2030.

If you would like to learn more about our initiative to improve representation in the transportation industry for women, contact us.